Beijing Wild Sound of the Month – Common Cranes in flight

Header image: an infrared camera image of a Leopard Cat patrolling Haituoshan against the backdrop of the downhill ski slope for the 2022 Winter Olympics.  Image courtesy of Peking University/China Felid Conservation Alliance (CFCA).

There are few major capital cities in the world that can boast a population of wild cats.  Perhaps surprisingly to many, Beijing is one.  This page is dedicated to Leopard Cat (Prionailurus bengalensis, 豹猫, Bàomāo) in Beijing.  It includes key facts, a timeline of key events and updates relating to ongoing research led by Professor Luo Shu-Jin of Peking University.  All information here is presented in good faith.  If you spot any errors or inaccuracies, or would like to contribute images to the gallery, please contact Birding Beijing using the contact form at the end of this page.  Thank you.

In Beijing, the subspecies of Leopard Cat is P. b. bengalensis.  It is widespread in the outer parts of Beijing Municipality (outside the 6th ring road) but rarely seen due to its nocturnal habits.  The first photograph of a wild Leopard Cat in Beijing was as recent as 13 September 2010 when Brian Jones photographed one at Yeyahu Wetland Reserve.

Today, Professor Luo Shu-Jin from Peking University is leading a team to find out more about Leopard Cats in Beijing.

About the Wild Leopard Cats in Beijing Project

Urban wildlife, or free ranging animals that can live in urban or suburban environments, has intrigued ecologists and the general public for decades. Contrary to popular belief, some wildlife may possess a surprising resilience to survive a human-dominated landscape. With spotted fur and a body size slightly larger than a house cat, the leopard cat is a widespread but elusive felid in Asia. Around Beijing, one of the world’s largest cities with a human population of over 21 million, the status of this species in the wild remains poorly known.  Since 2018, a collaboration between Dr. Luo Shu-Jin’s research team at the School of Life Sciences at Peking University and the China Felid Conservation Alliance (CFCA) resulted in the “Wild Leopard Cats in Beijing” project. The team set up infrared cameras along a 16-kilometre trail in the Haituo mountain area 90 kilometres northwest of central Beijing and collected suspected leopard cat scats on a regular basis for molecular ecology and population genetic analyses. The project aims to examine the local wildlife diversity, to investigate the population status of leopard cats, and to explore the pattern of anthropogenic disturbance and the mode of possible human-wildlife coexistence in Greater Beijing. As of September 2021, the study has uncovered the previously underestimated species richness of wildlife hidden in the mountains of Beijing, providing hope for a delicate balance between wilderness and human settlements in and around metropolitan Beijing.

Further updates from the Wild Leopard Cats in Beijing project will appear here.

An incredible daylight sighting of an adult female with three kittens swimming and wading across a shallow pool in Yanqing District (Terry Townshend, 清子Zoey, Shunzhu and Bonnie江波).  Photo below by 清子Zoey.

One of Peking University’s collared Leopard Cats, known as “Queen 1” passed my infrared camera during the evening of 7 April.  She is telling us a great deal about the ranges and behaviour of these elusive wild cats in China’s capital city.

A couple of images from the winter, including a spectacular standing pose against the backdrop of the full moon.  Images courtesy of Peking University and the China Felid Conservation Alliance.

At 06:29 on 4 March 2022 this Leopard Cat paused close to one of our cameras in Yanqing District.  With no collar, it’s another Leopard Cat using the study site, in addition to the three that have been fitted with radio collars in the last few months.

An article in China Daily about the appearance of Beijing’s Leopard Cats at the Winter Olympics.  There is no doubt that the construction of the downhill ski slope – inside a nature reserve – was bad for wildlife but the appearance of the cats during the Winter Olympics has been a wonderful opportunity to raise awareness about Beijing’s wild cats and to build pride, which will make it much harder to damage the habitat of these special animals in the future.

Beijing’s Leopard Cats, and Professor Luo ShuJin’s study, feature in this article by Danson Cheong of the Straits Times.

Data from the collars of the three female Leopard Cats are showing that they are primarily nocturnal, have distinct territories and swim regularly.  A field trip to the study site in late November set up a fresh trap in the hope of catching a male.  Comparison of the movements and territories of males and females will provide important information about the territories of the sexes, helping to gain a better understanding of the ecology of the Leopard Cat in Beijing.

A further two female Leopard Cats have been caught and collared at the study site!  It will be exciting to see the movements of these females – the first time they have been tracked in Beijing.  The team is hoping to catch a male in the same area, which will provide an opportunity to compare the movements of the sexes.

The team visited the study site on the day of the first snow of the winter in Beijing, and were delighted to find an Oriental Stork on site…

Data from the female Leopard Cat show that she is a good swimmer!  There have been at least eight swimming records in the first seven days since her capture.  Can you spot the Leopard Cat in this image?

Big news!  The team has trapped a Leopard Cat at a site in Beijing and fitted a collar that includes a transmitter.  All being well, this female will tell us a lot about the range and activity patterns of Leopard Cats in Beijing.

A short letter by Luo Shujin about Leopard Cat in Beijing is published in Science Magazine.

One of the most exciting co-discoveries of the Wild Leopard Cats in Beijing project has been the capture of an image of Mountain Weasel (Mustela altaica).  The Mountain Weasel is a small mustelid native to the mountains of East and Central Asia. In China it can be found on the Qinghai-Tibet Plateau and in some high-altitude regions of northern and southwestern China.

An adult mountain weasel was photographed by a camera trap in September 2019 in the Haituo mountain area of Beijing. The finding was published in Acta Theriologica Sinica (see link to the paper below, in Chinese).  The record follows two images of Mountain Weasel taken at Lingshan in Mentougou District and, together, they add a new species of mammal to Beijing’s avifauna and highlights the likely underestimated fauna diversity even on the outskirts of one of the world’s largest cities.

Gallery of images of Leopard Cat from Beijing

With thanks to Peking University and the Chinese Felid Conservation Alliance (CFCA) for permission to use these images. 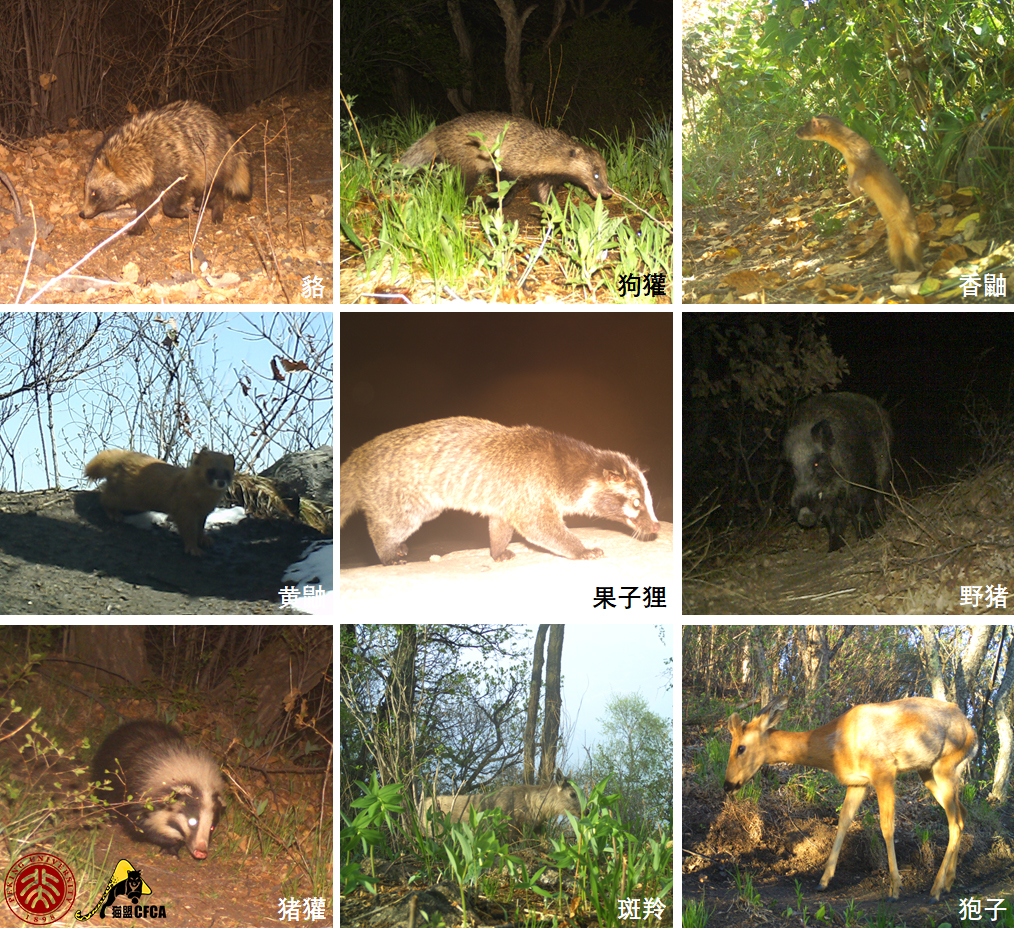 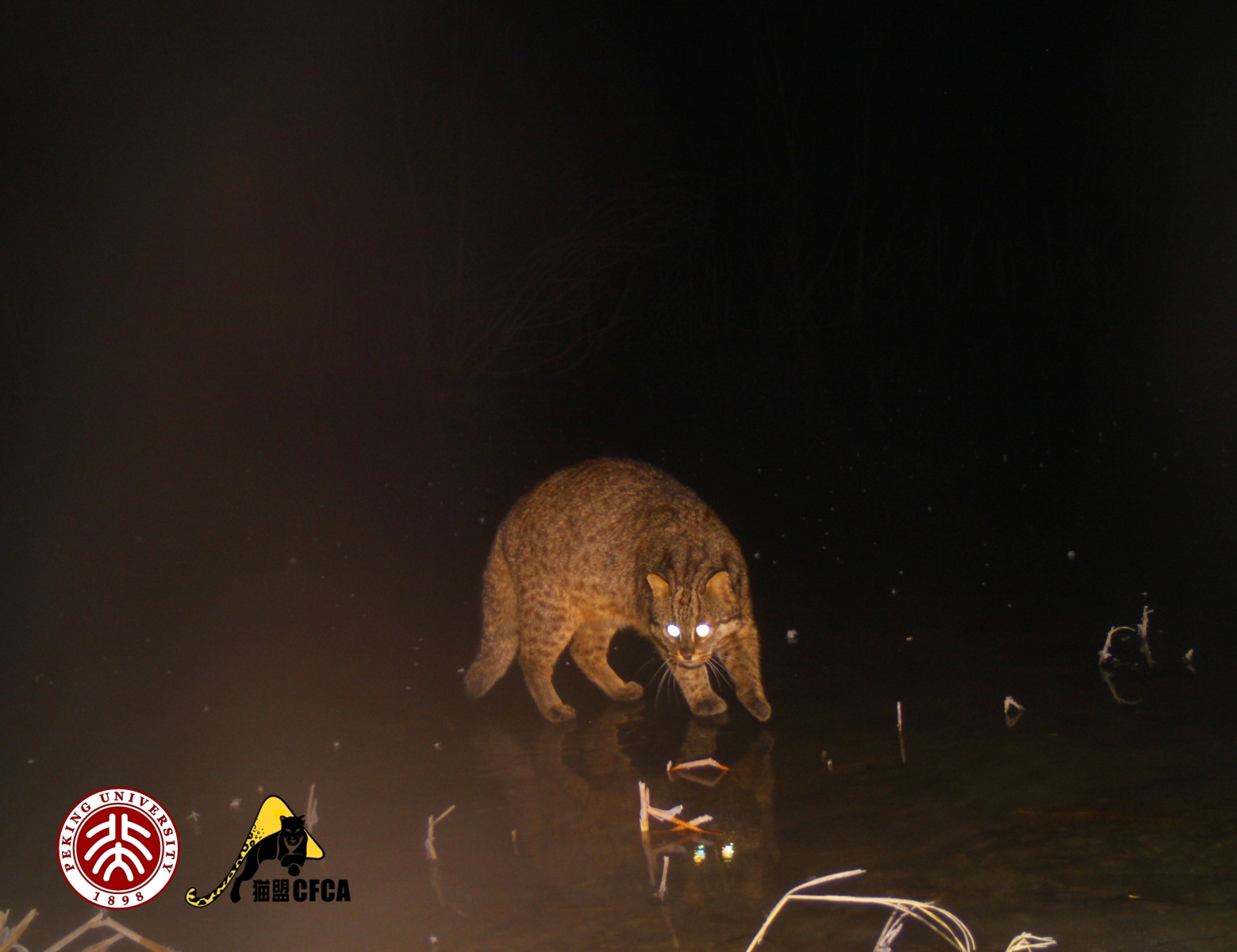 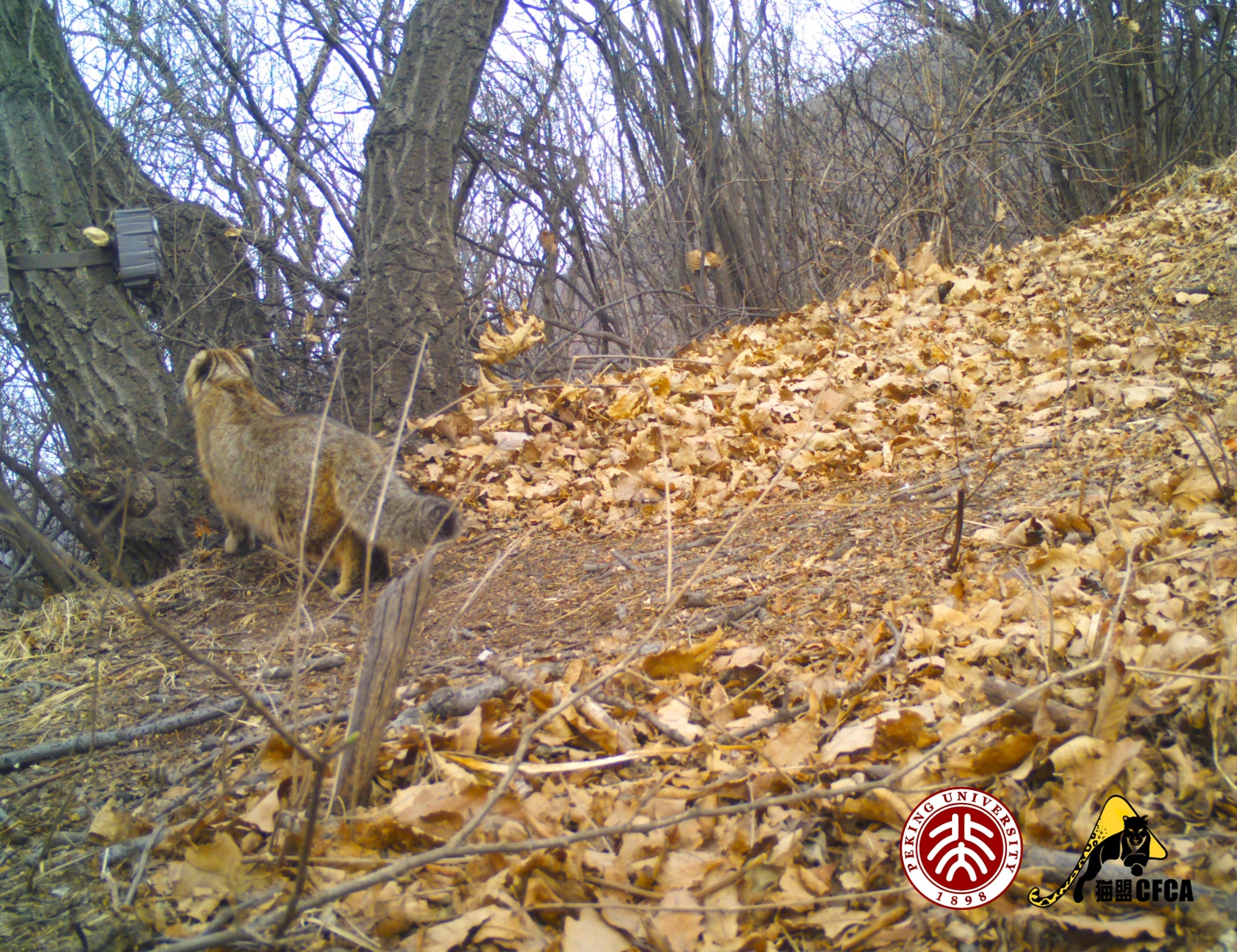 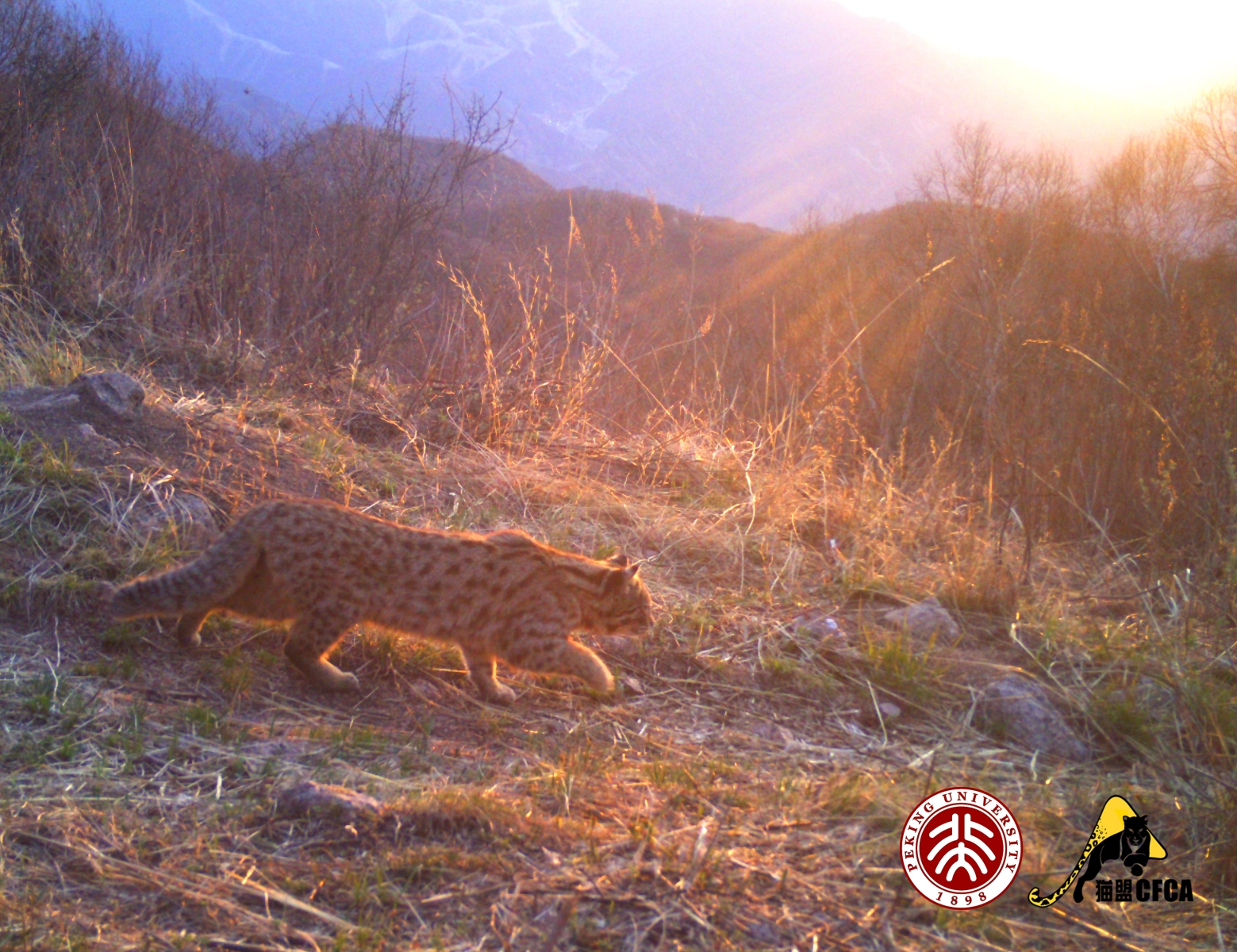 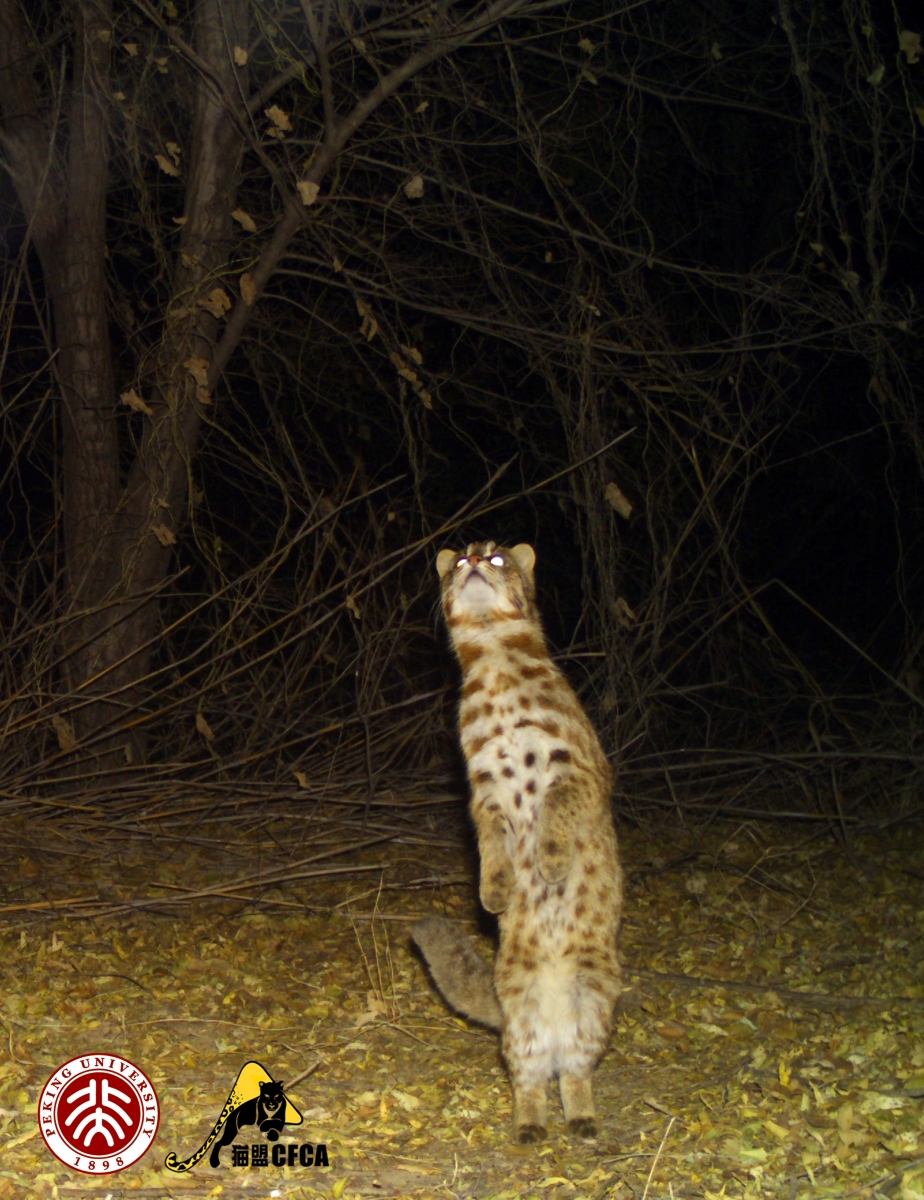 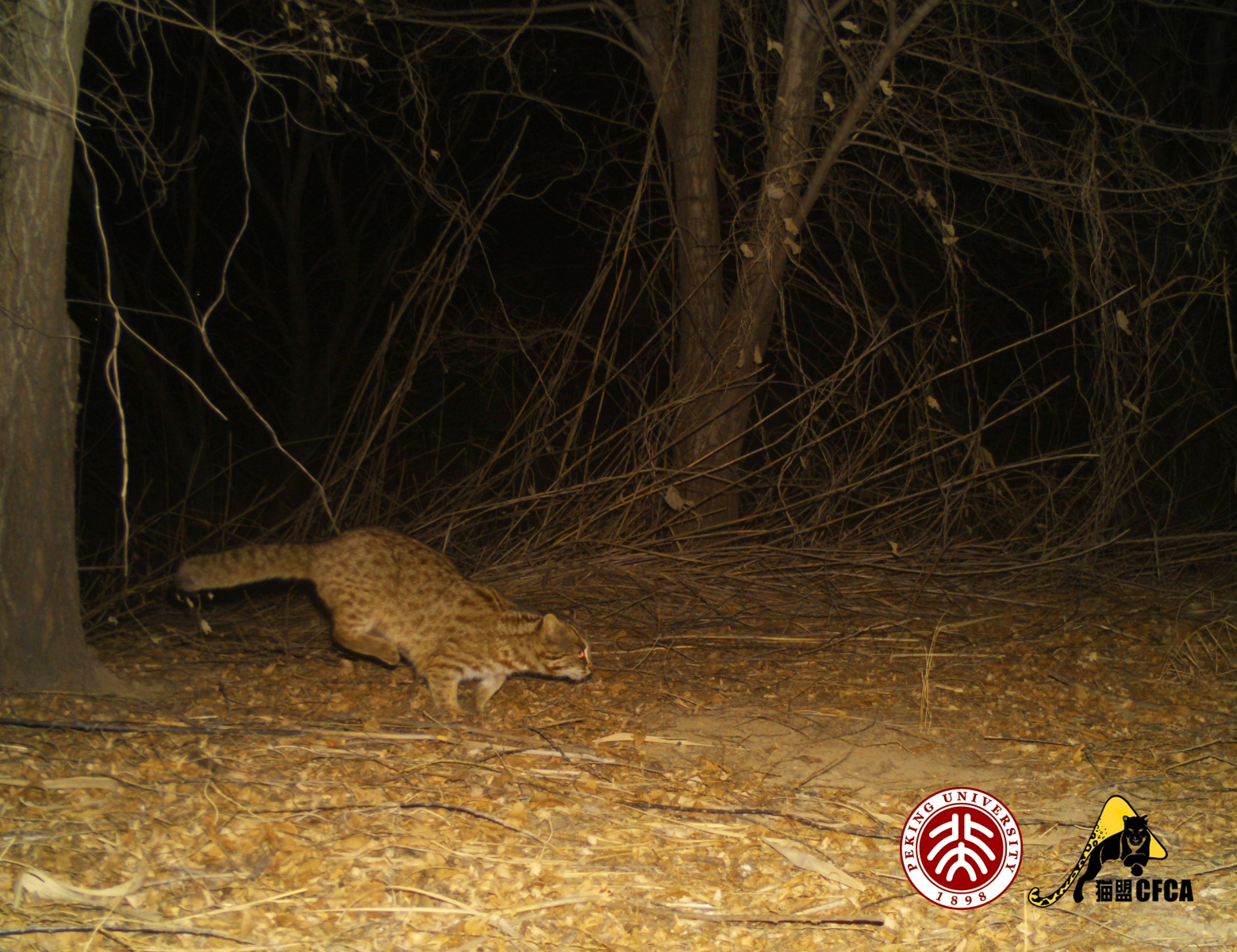 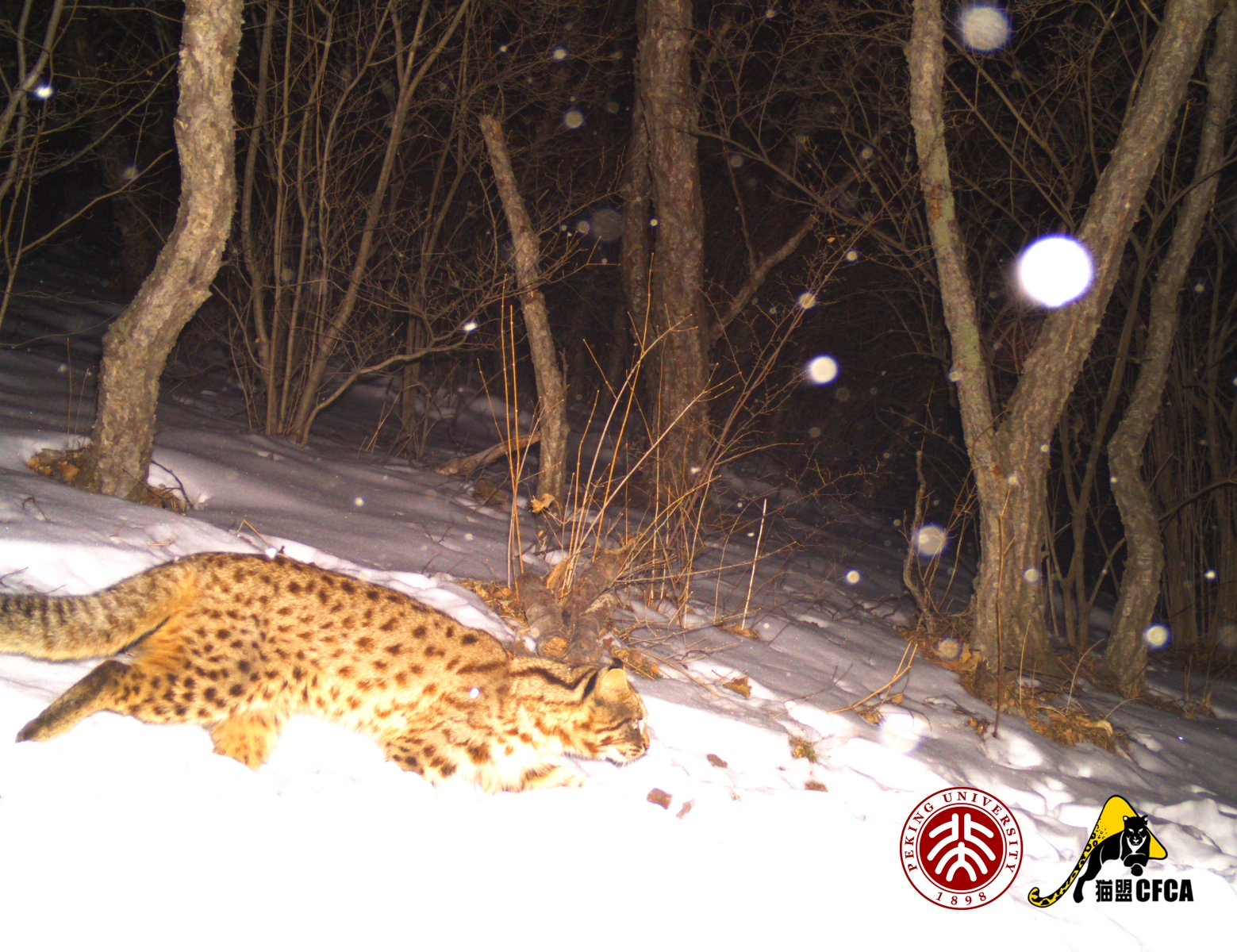 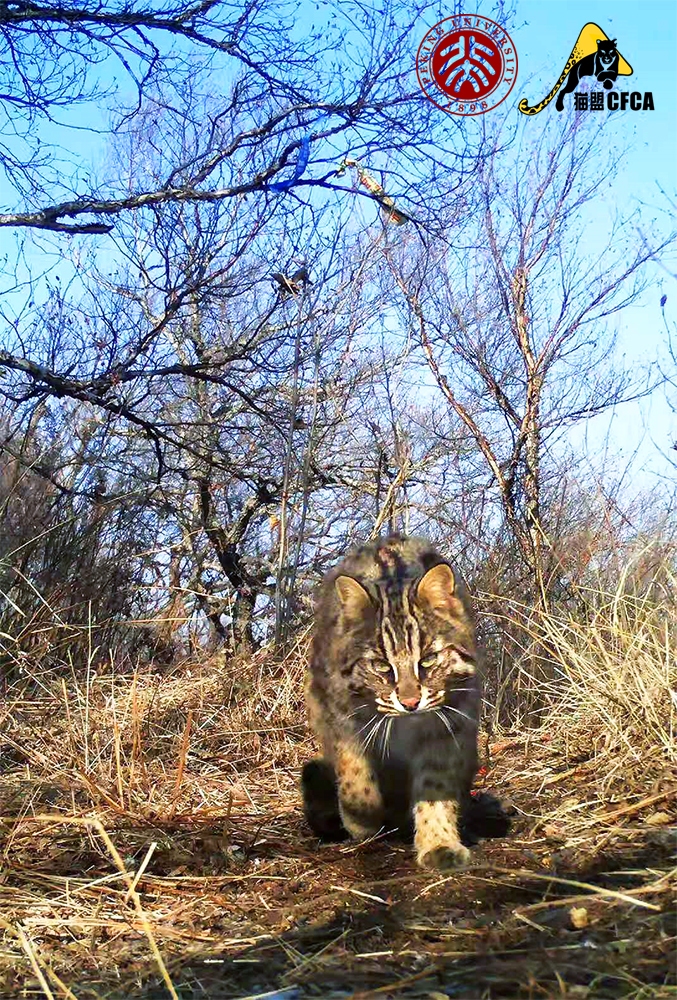 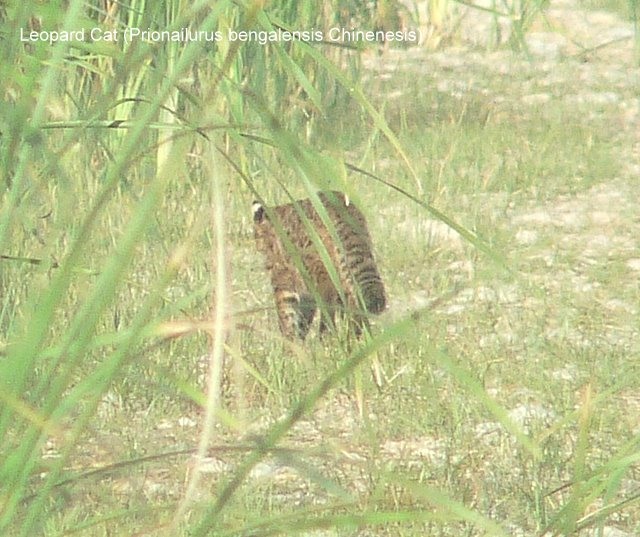 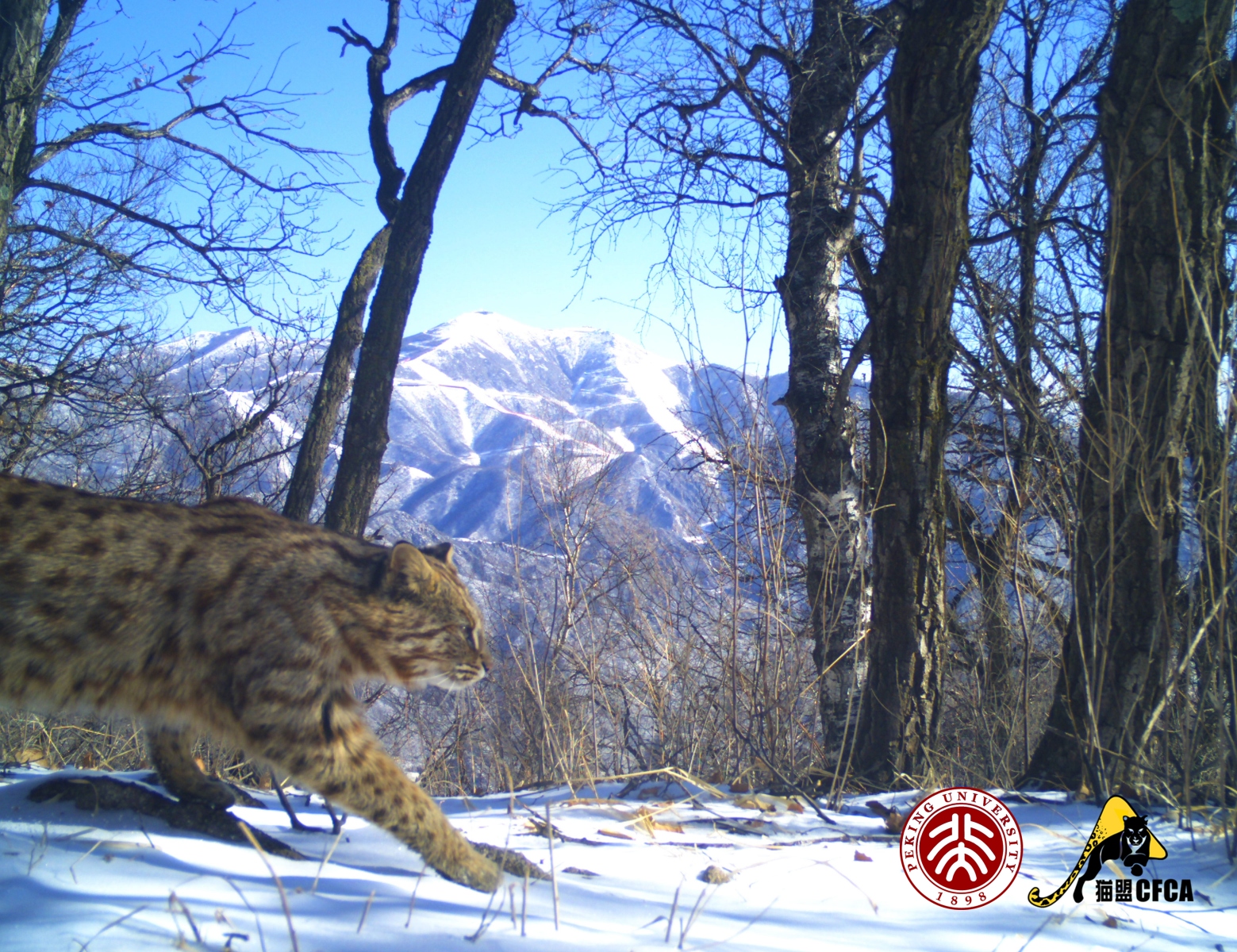 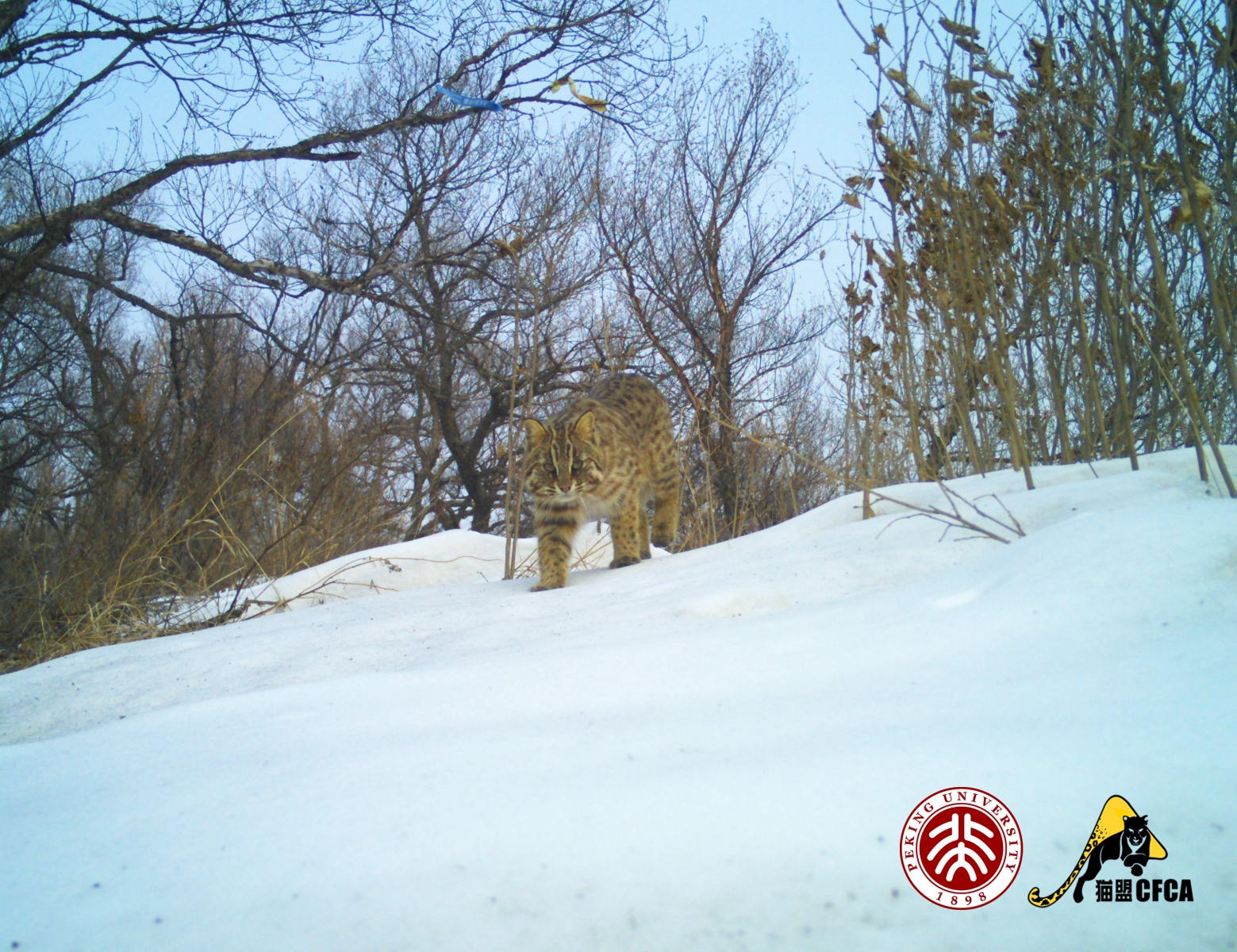 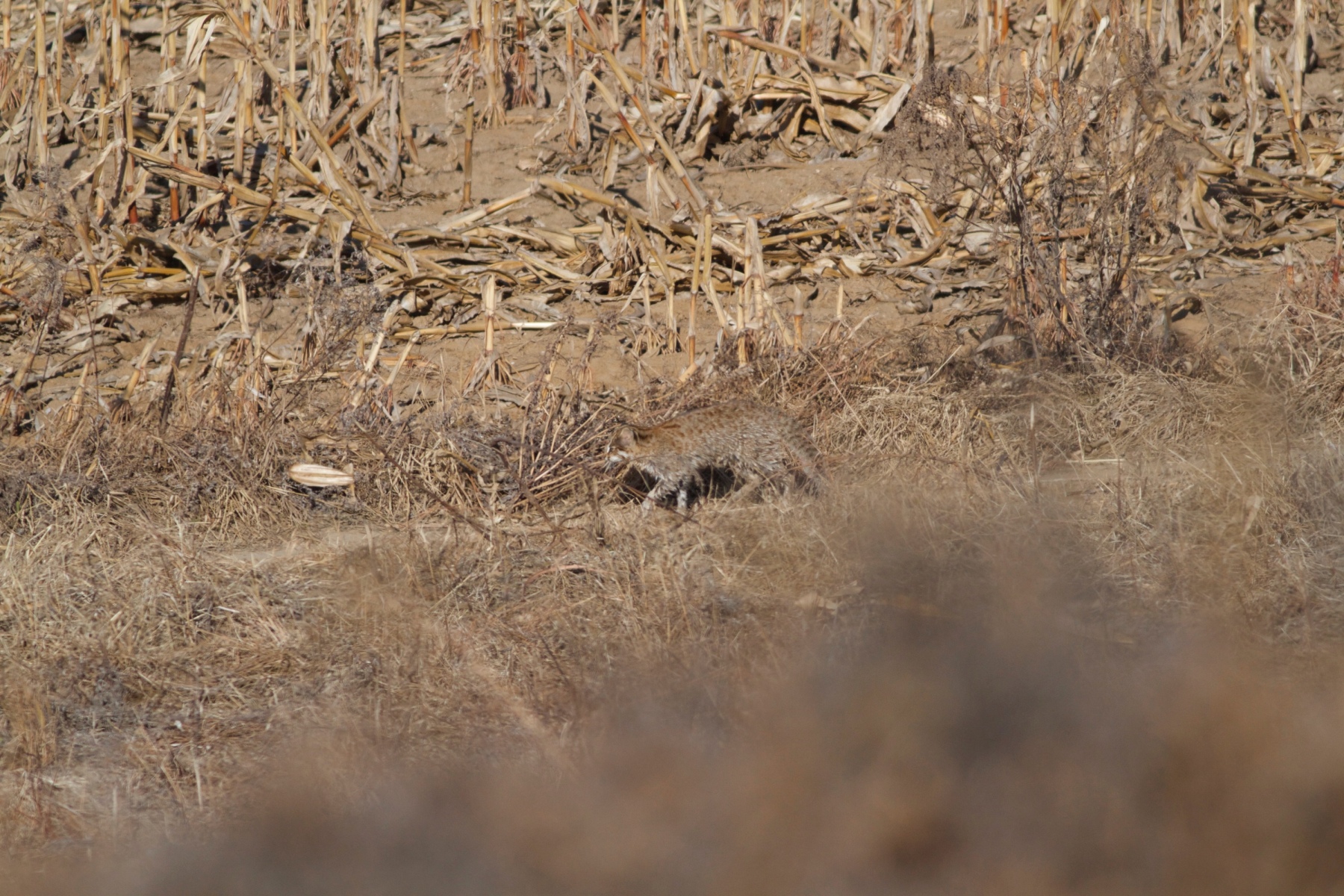